House | Half a tatami to stand on, a single tatami mat to sleep on According to a Japanese saying, “a person needs only half a tatami mat worth of space when awake, and a full tatami mat when asleep.” Defining the minimum amount of space needed in a house, the saying reflects the Japanese view that unnecessary luxuries should be eliminated from the living space.

In Japan, it’s customary for people to take off their shoes when they enter a house. Creating a space that is cleaner than that found outside is fundamental to the Japanese way of life. With the body in direct contact with the environment, today’s advanced sensory technology is able to create new forms of communication between houses and their occupants.

Enlisting an architect to design your house – no matter what your financial status – is another Japanese custom. It’s a tradition that drives the housing market, while nurturing the talent of architects. The evolution of housing from ancient times to the present day is notable within Japanese history and culture, and serves as a powerful indicator of future potential.

Japan’s earliest houses were the pit houses synonymous with the Jomon period (before 300 BC). The construction of such houses involved digging a round or rectangular pit in the ground, erecting poles inside it, and fitting a framework for a roof that could be thatched with reeds, grass, or similar plant material. Next, a fireplace was constructed inside for cooking. The pit houses provided a place to sleep that was protected from the elements, each representative of the archetypal houses we live in today. Later, in the Yayoi period (300 BC–250 AD), stilted houses with raised flooring were starting to be constructed in order to provide protection against flooding and vermin. 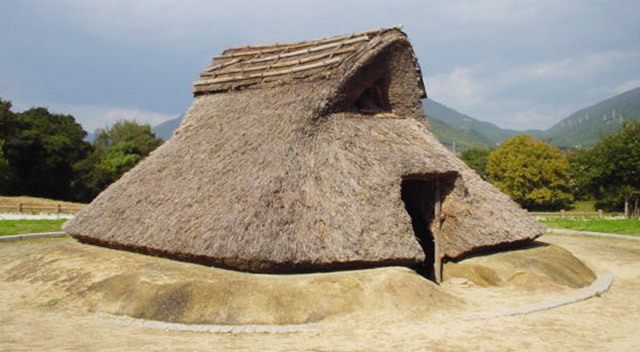 In the Heian period (794–1185), the shinden-zukuri style emerged. The homes of aristocrats were built around a shinden hall, linked to other rooms by corridors, with a pond constructed outside, to the south. Rooms were rectangular boxes partitioned by moveable furniture such as free-standing byobu screens and hanging sudare blinds. Later, the emergence of the samurai in the Muromachi period (1336–1573) saw shoin-zukuri become the mainstream residential architecture style, that centered around a reception room in which people could meet and entertain their guests. Sliding paper screens such as opaque fusuma and translucent shoji were used for partitioning and floors were covered with tatami matting – design elements like these are regarded as the origin of the Japanese-style rooms we see today. Shoheiga, paintings on partitions and screens, became most sophisticated in order to reflect the status of residents. Illustrated Handscroll of the ‘Tale of Genji’

From mid-15th century, advances in carpentry skills and aesthetics led to the emergence of refined dwelling spaces that featured custom design traits chosen by the occupant. Sukiya – coming from the word Suki, meaning taking delight in elegant things – was the name given to a house that strongly reflected the likes and tastes of its owner. Meanwhile the chashitsu (tearoom) – a symbol of Japanese-style minimalism – became popular as the tea ceremony tradition developed and put emphasis on finding beauty in quiet simplicity instead of luxury and splendor. Until the Muromachi period (1336–1573), common people lived in pit houses, but from the Kamakura period (1185-1333) onwards, architecture constructed around posts embedded directly into the earth became popular and continued to evolve. Minka, or folk houses, were broadly categorized into noka (farmhouses) and machiya (town houses). Noka were adapted for agricultural work, and typically incorporated an indoor earth-floored area with a kamado cooking range. Stables were constructed alongside. Machiya were constructed in densely-populated districts, to bring living and working quarters together in the same building. Plots were narrow, with a tori-niwa passage leading from the front of the house through to the rear, where living areas and storehouses were situated. Japan’s population began to be concentrated into urban areas during the Edo period (1603–1868), a movement which was greatly accelerated by the postwar industrial recovery.As a mountainous country with relatively little flat land, large numbers of collective housing projects were constructed to secure living space. Ordinary Japanese people came to live in these homes with standard-size living spaces calculated by analyzing typical lifestyles. Today, there are growing efforts to reform the collective housing stock and convert it into spaces suitable for contemporary living. Japanese people also have a strong preference for detached, single-family housing, which means there are many areas with large numbers of similar houses. However, even families that aren’t wealthy are likely to have enlisted an architect to design their house, so there are many unique houses that have been cleverly planned to fit small plots. This is considered to be one of the reasons that Japan is so successful at nurturing talented architects. Many Japanese architects first distinguish themselves by designing houses. After studying architecture independently, Tadao Ando became famous for his Row House in Osaka. Similarly, architectural historian Terunobu Fujimori gained a reputation as an architect after designing his own house, the Tanpopo House (Dandelion House). The approach to living implied by houses like these can be as innovative as the architecture. Individual houses such as these can be considered an expression of Japan’s desires for the future. The hut was originally considered to be a rough, temporary dwelling, but interest in huts and tiny houses is growing. In addition to pointing out that the minimum necessary living space is actually quite small, the saying that “a person needs only half a tatami mat worth of space when awake, but a full tatami mat when asleep” hints at the dignity of compact living and the concept of honorable poverty. The sense of finding beauty in a minimal space and the pleasure of being in isolation, surrounded by nature, are sentiments which are still valued in Japan today.