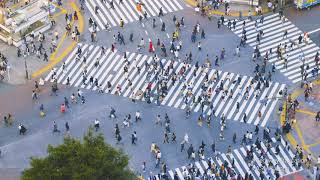 The heart of Tokyo’s youth culture is arguably located in the district of Shibuya, a bustling mecca of shopping and entertainment. At any given time of the day, Shibuya is packed with swarms of people, often traversing through the iconic intersection known as the Shibuya Crossing. The Shibuya Crossing has made its appearance in films, magazines, and blogs due to the astounding number of people who cross the intersection daily, with an estimated 1,000 to 2,500 people making their way across every two minutes at its busiest times, enough to fill a football stadium in one day.

Rivalling the Shibuya Crossing, another location in the heart of Tokyo that warrants a visit is the Sukiyabashi Crossing, a pedestrian intersection located at Harumi and Sotobori streets. Sukiyabashi sits between the Imperial Palace on one side and the trendy entertainment district of Ginza on the other, bridging the worlds of the Imperial family and the economic center of industrialism and commerce.