Hot Spring | A gift from deep below the volcanic islands Japan is an archipelago, located on a volcanic belt, that boasts roughly 20,000 hot spring facilities all over the country. Since ancient times, the Japanese have enjoyed bathing in hot water: it is an integral part of their culture. There are quite a few myths and legends linked to the onsen or hot spring.

The practice of bathing in hot springs became popular for healing and relaxation in the Edo period (1615-1867). Farmers flocked to onsens during the off-season and used them as a therapeutic spa to cure their aches and pains from exhaustive labor. Today, cultural experiences deriving from onsens have become increasingly sophisticated. They now constitute one of the key tourist destinations in Japan, offering a pleasurable place for people to enjoy their beautiful nature, hospitality, traditional architecture and local cuisine. Across the country, numerous onsen ryokan or Japanese-style inns, and hotels are available, provided with their own hot spring baths. They strive to include appealing features, such as scenic beauty and relaxing ambiance, in open-air hot-spring baths known as rotenburo, and larger hot spring baths inside the buildings known as daiyokujo. Bathing at onsens is well mannered, and foreign visitors are often familiar with how to take a hot spring bath.

An unroofed bath located outside is called a rotenburo. People enjoy an open view and nature while soaking themselves from neck to toe in hot water, and this is one of many superb experiences unique to Japanese culture. Naturally-shaped open-air hot spring baths are full of rustic scenery. Today, rotenburo are more likely to be a bathtub within a ryokan or hotel where walls or partitions are provided for private enclosure, albeit not covered with a roof, so that people can take a bath in a more relaxed manner. Uchiyu refers to a hot spring bath inside a ryokan or hotel. In recent years, as different to traditional-style onsen towns and therapeutic spas that only offer lodging, more accommodation facilities have their own hot spring baths so that guests need not to go out to communal bathhouses (sotoyu). The word uchiyu may also mean a bathtub installed inside a building, as opposed to rotenburo. Onsen with a Guest Room

Private onsen baths and rotenburo situated in guests' rooms, which differ from large public hot spring baths used by many other guests, are more sophisticated than ever before. The potential value of onsen spa tourism has been noticed leading to the growth of broader architectural and scenic attractions that include onsen. Where onsen were once predominately enjoyed communally, private onsen to be enjoyed in a more luxurious manner are now easy to find across Japan. The growth in private onsen is partly oriented towards international visitors, some of whom are unaccustomed to communal bathing. A renowned local hot spring district is referred to as an onsengai (which literally means "hot spring town"), where a cluster of lodgings, restaurants, souvenir shops, and amusement arcades host crowds of teeming visitors. In an onsengai, a sotoyu is often available for whoever wishes to use it, regardless of where he or she is lodging. The Japanese enjoy the bathing practice of walking the onsengai streets with yukata (kimono robes) and stopping at different sotoyu bathhouses. Another enjoyment is the relishing of various foods, such as onsen tamago (egg) boiled with thermal heat, and onsen manju, a sweet steamed bun filled with red bean paste. Hot springs secluded in tranquil mountains are known as hitou, literally meaning "secret hot spring". In contrast to a bustling onsengai or hotel, hot springs that are quietly spouting in out-of-the-way locations, with virtually no visible man-made structures, continue to be popular. Although less easily accessible, bathing in such hot springs after an arduous arrival offers exceptional satisfaction. How to Bathe in an Onsen

First, wash off your body and then get into a bathtub. While fresh hot spring water continues to pour in, it is good manners to keep it clean as much as possible, because other people also soak themselves in the same bathtub. Before getting into the bathtub, rinse your body off with bathwater, which is called kakeyu. Your towel should not enter the bathwater. You might often see people put their towel or tenugui (traditional Japanese towel) on their heads; this is associated with the etiquette of not soaking your towel it in the bathtub. 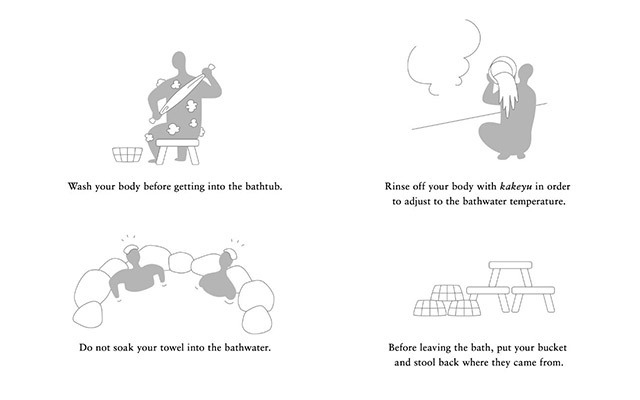 Pubic baths, commonly known as sento, are one of the cheapest and most accessible options for an onsen. You simply need to pay to enter at the bandai, a platform for an attendant located at the entrance, and if needed buy bathing accessories like soap. The grand décor and temple-like architecture sometimes found is a reminder that public bathing was once the people of Japan's greatest entertainment. Public baths are usually situated in residential areas and thus continue to be a communal oasis for locals today.