The Texture of Life | Japanese Paper

In most Western societies, paper is often thought of as a disposable material. It’s used in packaging, shopping bags, and Post-It notes that are not meant to last beyond one use. Even in books and other publications, the paper itself is not as important as what is printed on it – and newspapers, of course, are thrown out every day.

In Japan, however, paper has a more distinctive personality, and was traditionally designed to last. Paper was invented in China about 2000 years ago, and reached Japan around the seventh century by way of Korea (it only became established in Europe in the 11th century). When machine-made paper from the West began to be imported into Japan in the Meiji Period (1868–1912), people began to refer to Japanese paper as washi (“wa” meaning Japanese, “shi” meaning paper), in order to distinguish it from other varieties. But there are many other differences – for one, while Western paper typically utilizes wood-pulp from trees, washi is made from the fibers of smaller plants and shrubs like kozo (paper mulberry), mitsumata, and ganpi. Second, the classic technique of manual paper-making (known as nagashi-zuki) uses a more viscous pulp mixture, which is rocked back-and-forth on a bamboo screen before drying in the sun. This causes the paper fibers to be tightly interwoven, resulting in product that has special characteristics.

It’s stronger and more pliable than wood-pulp and machine-made paper, which led to its use not only in books, drawings, and paintings, but also as a material for architecture and everyday items. In the past, it was used in armor as well as kimono-lining for its flexibility and warmth. Its sturdiness and transparency made it an integral material for sliding paper screens and partitions (shoji and fusama), as well as umbrellas and lanterns. As it has a special absorbency, it’s ideal for calligraphy and printing (and gives the unique graphic look to Japanese art forms like ukiyo-e woodblock prints). And its lightness and ability to customize with countless colors, patterns, and forms makes it the ideal material for everything from origami to handkerchiefs to pochi-bukuro, the iconic small gift envelopes printed with gofun pigment and mica-dye.

Today, washi survives not only as a heritage craft, but as a constantly innovating design practice. Certain historic areas famous for making washi like the Kadoide area of Niigata Prefecture (more below), as well as individual factories and designers, continue to update and experiment with technique and new products utilizing washi.

Awagami Factory in Tokushima prefecture listens carefully to user needs and produces washi oriented towards modern-day customers and living spaces – such as washi compatible with offset printing and inkjet printing.

Isamu Noguchi designed the “Akari” lantern in 1951 based on the traditional craftsmanship of Gifu paper lanterns (chochin), applying his sculptor’s genius while bringing out the warmth of the washi and bamboo ribbing materials. Noguchi produced over two hundred Akari Light Sculptures, and his designs are still regularly employed for illumination throughout the world, not only in association with Japanese architecture

The humble “paper plate” gets an upgrade in WASARA tableware, which is manufactured using lightweight molded washi pulp and conceived expressly for holding as you eat (ideal for catered events and parties).

Considering the endless adaptations of washi paper brings to mind the philosophical qualities captured by scholar Junichiro Tanizaki in 1933. “Japanese paper gives us a certain feeling of warmth, of calm and repose,” wrote Tanizaki in his legendary book, “In Praise of Shadows.” “Western paper turns away the light, while our paper seems to take it in, to envelop it gently, like the soft surface of a first snowfall. It gives off no sound when it is crumpled or folded, it is quiet and pliant to the touch as the leaf of a tree.” 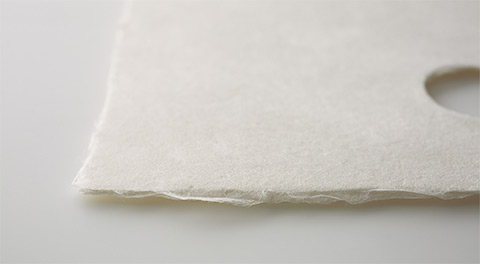 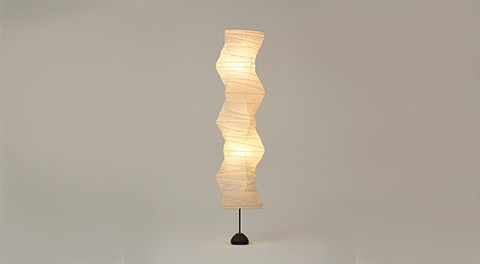 Although washi has been made throughout Japan, there are certain production centers famous for quality, including Echizen, Kadoide, Mino, Sekishu, Tosa, Inshu, many of which are still making washi today despite competition from cheaper, faster methods of machine-made paper. In 2014, UNESCO added washi to its list of the world’s “Intangible Cultural Heritage” to be safeguarded, particularly highlighting papers from Shimane, Gifu, and Saitama Prefecture. But there are special varieties to be found throughout the nation.

When washi first took hold in Japan, it became a valuable cottage industry in various areas, particularly in hubs of government and the economy. By the Edo period, washi was in great demand by the general public, so the Shogunate designated only paper from Echizen in Fukui Prefecture for official use by governmental officials, nobles, and samurai. Centuries later, Echizen washi is still famed for its elegance and often used in birth announcements.

During the Taisho Period (1912–1926), there were around forty washi papermakers in the Kadoide area of Niigata Prefecture, but by 1973, only Kadoide Washi remained. Today they still manufacture washi, and even cultivate their own kozo plants (paper mulberry) as raw materials. Kubota, a famous brand of sake, produces its labels here. At JAPAN HOUSE São Paulo, Kadoide Washi artisan Yasuo Kobayashi designed an innovative room partition material made by coating a metal mesh with paper mulberry fibers.