Ramen | Secrets of the Bowl

Japanese cuisine has countless dishes that are instantly recognizable across the world – but few of them have an entire museum dedicated to them. Ramen is the exception, with not one, but three museums in Japan celebrating the iconic soup noodles that have become a beloved staple at home and foodie obsession abroad.

Two of those museums are in Yokohama, the bustling port city not far from Tokyo where ramen’s history began. Though subject to some debate, ramen likely first originated in Japan as an adaptation of Chinese wheat noodles. Scholars believe ramen (a transliteration of the Chinese la mian) was first brought over to Yokohama Chinatown by immigrants in the late 1800s, and then adapted to local tastes. Around 1910, more official ramen restaurants began opening in Yokohama and Tokyo catering to the tastes of Japanese customers and distinguishing their offerings from the more traditional udon or soba. The original form of ramen was simply wheat noodles in broth served with Chinese style pork, and only later did chefs begin adding kansui, or “alkaline water” to the noodles, giving them their distinctive yellow color, chewy texture, and rich flavor. After World War II, Japan faced devastating food shortages due to the interruption of the nation’s rice supply. As wheat flour was more available, ramen unexpectedly came to the rescue and helped keep hungry communities fed. Soon, opening a ramen stall became a viable small business for families trying to rebuild, and continued to popularize the dish across the nation.

In 1958, another milestone occurred when struggling inventor Momofuku Ando came across the idea of flash-frying ramen noodles, allowing them to be stored for long periods of time and prepared by simply boiling them in water. Ando’s product (under the brand name Nissin) was a smash hit, and countless imitators and variations followed (including his own “Cup Noodles” in 1971, which were even simpler due to the Styrofoam cup packaging). Instant noodles were exported around the world, and became a symbol of Japanese innovation and efficiency.

But not all ramen comes in a cup. Though instant noodles were making a splash in the post-war era, creative chefs and ramen shops across the country were experimenting with new ingredients and techniques to localize ramen. The main variations are in the choice of broth, toppings, and seasonings, put together in dozens of combinations. Major broth types include tonkotsu pork broth (not to be confused with tonkatsu, breaded pork cutlet), shoyu or soy sauce broth, shio or salt (the most old-fashioned), miso broth (which originated in Hokkaido prefecture), and kare or curry ramen (which many cities claim to have invented). Typical toppings range from the classic chashu or braised pork, a marinated boiled egg, bamboo shoots (memma), sliced fish cake, bean sprouts, green onion, seaweed, and corn, while other seasonings might be pepper, butter, sesame seeds, and garlic. Traveling the length of Japan, you might come across as many variations of ramen as there are towns, and always find an unpredictable, yet savory, combination in the steaming bowl placed in front of you.

In the early 2000s, as global foodie culture began to grow, ramen became a cultural experience travelers sought in Japan, and both Japanese and international chefs saw opportunities to open ramen restaurants overseas. While some Western consumers might have only known Cup Noodles from their college days, now most Western cities have a plethora of thoughtful, hand-crafted ramen restaurants to choose from. Ramen has graduated from being a survival food for the busy worker, or a dorm room favorite for students on a budget, to a high-end foodie destination. There are now magazines, TV shows, and custom tours dedicated to ramen in Japan and beyond. As the history of ramen itself is a story of innovation and adaptation, it’s no wonder it continues to evolve in surprising – and always delicious – ways.

Movie & Bites at Home | Tampopo
“Movie & Bites” is coming to the small screen – your screen! – with a suggested ramen-themed movie and ramen enhancement tips that the whole family can enjoy together. 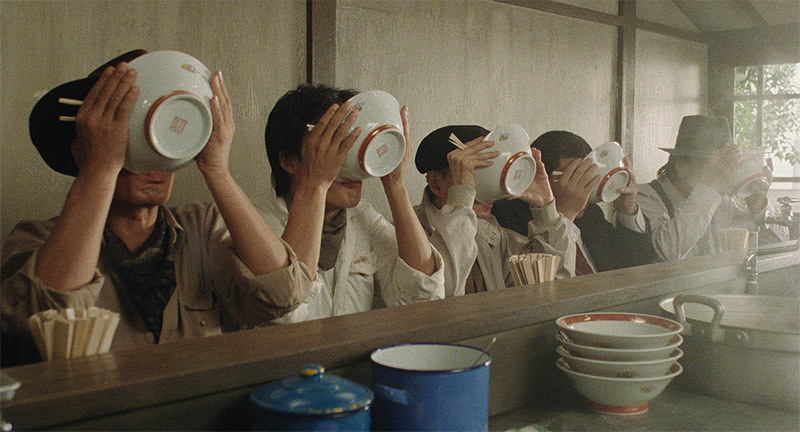 Craftsmanship of the Ceramic Valley

Superfood Squared: The Rise of Tōfu