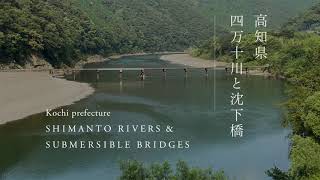 A meandering river and the people who live nearby

In the southeastern part of Shikoku is the longest river on the island: the Shimanto, which twists for 196 kilometers through the valley below the towering mountains. Executing extreme contortions, the river’s path creates sheer cliffs on one side, reflected by beautiful white pebbled riverbeds on the other. It is a repeating rhythm of tree-covered precipices and stony beaches. From time to time, rugged rocky stretches appear on the river’s surface, creating perilous passes for the navigation of small boats. When I visited in the summer, the flow was sluggish and the river low, perhaps because of the heat wave and continuing drought.

The Shimanto became well known as “Japan’s last clear river” in the NHK documentary, “Tosa: Shimanto River - clear water, fish, and people…” For those who had created modest farms in its watershed, the broadcast awakened an awareness of the larger meaning of their familiar river. Harvesting an abundance of marine life, such as sweetfish, eel, freshwater prawns, goby, grass kelp and more, the people here have always lived in concert with the river. Because the often overflowing river wouldn’t allow for wooden bridges, the people traditionally got around by ferries, but after the war, many concrete bridges were constructed. These are today’s submersible bridges.

Submersible bridges have no rails, so when the river runs high, they offer no resistance, simply sinking below the surface. It’s said that when these were constructed, all of the people who lived nearby turned out to help. Because these bridges are built close to the water’s surface, it’s said that they have been a part of the local landscape, keeping people’s lives close to the river.  With advances in bridge technology, increasingly bridges have begun to be built far above the submersible bridges. At the same time, the local people have come to recognize that the scenery of the submersible bridges fosters affection and pride in their region.

Makoto Umebara, a designer based in Kochi Prefecture, recognizing the importance of the landscape created by the submersible bridges, once lived near one called Kayabukute in the middle of the river basin. In a piece titled, “Let’s Rebuild Japan’s Scenery” Umebara showed that the landscape is the spirit of the people, and now supports the area’s farming under the banner, “Shimanto Watershed Agriculture”. Chestnuts were planted according to Umebara’s proposal, and now chestnut sweets made out of “Shimanto Chestnuts” have begun to gain popularity.

While on average 70% of the Japanese archipelago is made up of tree-covered mountains, in Kochi Prefecture, this figure is 84%, the highest in Japan. The land surrounding the Shimanto River is also mountainous and the river was created by the area’s rainfall. Although the area is neither virgin forest nor the traditionally cultivated foothill environment known as satoyama, villages are scattered both on the riverbanks and in the heart of the mountains. The scenery of this Shimanto Watershed Agriculture is modest but dazzling. Rice, tea, yuzu [a type of citrus] and vegetables are grown in the small fields, and shiitake mushrooms are cultivated on freshly cut logs of sawtooth oak and chinkapin (an indigenous species of beech).

Japan’s resources are the landscapes that are created by the people who make their lives with a sense of pride, recognizing the bounty of their particular regions. As I was recording the images of these submersible bridges, I understand that I was being won over by that beauty. I am only a visitor, after all, deeply understanding neither the life rooted in this land nor its severity. And yet I feel the happiness of being touched by this scenery. In Japanese, the word “tourism” is written as “seeing the light”, a fitting phrase. I hope that you will see the beautiful light emanating from the submersible bridges of the Shimanto River in Kochi Prefecture.