Chasing the Eccentrics:
Takashi Murakami in Conversation with Etsuko Price 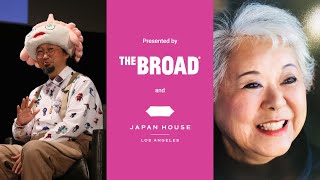 Presented in conjunction with The Broad’s special exhibition Takashi Murakami: Stepping on the Tail of a Rainbow, on view May 21–September 25, 2022, this conversation with Etsuko Price—who with her husband Joe, amassed an unparalleled collection of traditional Japanese art focused on the Edo-period—and artist Takashi Murakami explores how traditional Japanese painting has influenced and inspired Murakami’s creative practice. This dialogue, moderated by Yuko Kaifu, President of JAPAN HOUSE Los Angeles, also offers a window into the long-held friendship Murakami and Mrs. and Mr. Price have developed over their passion for traditional Japanese art.

Among the Price family and Murakami’s many shared passions are painters labeled as “eccentrics” by the art historian Nobou Tsuji in his 1970 book Lineage of Eccentrics. Artists such as Itō Jakuchū, 1716–1800, Nagasawa Rosetsu, 1754–99, and Soga Shōhaku, Japan, 1730–81, inspired both the Price’s collecting and Murakami’s art practice. In 2009, Murakami and Tsuji began a creative dialogue centered on the eccentrics. This collaboration led to an exhibition at the Museum of Fine Arts in Boston in 2017, for which Murakami and Tsuji selected Japanese works from the museum’s collection and showed them alongside works by Murakami. Many of the artists in the exhibition figure prominently in the Price collection.

The conversation (in both Japanese and English) was held in the JAPAN HOUSE Los Angeles Level 5 Salon, and included an audience Q&A.

The program was livestreamed on the JAPAN HOUSE LA and The Broad websites as well as on respective Facebook pages @TheBroadMuseum @JapanHouseLA.

Ticketing Information
Tickets include access to The Broad’s special exhibitions Takashi Murakami: Stepping on the Tail of a Rainbow and This Is Not America’s Flag and the third floor galleries between Wednesday, May 25 until Thursday, June 30, 2022, during operating hours. Access to Yayoi Kusama's Infinity Mirrored Room—The Souls of Millions of Light Years Away (2013) is not included and must be booked separately here. Please present your Chasing the Eccentrics event ticket at the main entrance of The Broad.

About Takashi Murakami
Drawing from traditional Japanese painting, sci-fi, anime, and the global art market. Takahashi Murakami creates paintings, sculptures, and films populated by repeated motifs and mutating characters of his own creation embodying an intersection of pop culture, story, and fine art. In 2000, Murakami created Superflat, an exhibition that advanced his superflat theory of art, highlighting the “flatness” of Japanese visual culture from traditional painting to contemporary subcultures in the context of World War II and its aftermath.

Following the Tōhoku earthquake of 2011 and the subsequent nuclear crisis at Fukushima, Murakami began exploring the impact of natural disasters on Japanese art and culture. His 2014 Gagosian exhibition in New York, In the Land of the Dead, Stepping on the Tail of a Rainbow, featured an immersive installation of Buddhist arhats: clones of his fictional creature Mr. DOB; and karajishi, the mythic lions that guard Japanese Buddhist temples. Murakami earned a BA, MFA, and PhD from Tokyo University of the Arts, where he studied nihonga (traditional Japanese painting). In 1996, he established the Hiropon Factory, a studio/workshop that in subsequent years grew into an art production and artist management company now known as Kaikai Kiki Co. Ltd.

About Etsuko Price
Etsuko Price was born in Fukuchiyama City in Kyoto and was brought up in Tottori Prefecture of Japan. She moved to the U.S. in 1965 and married Joe Price in 1966. Since then, Joe and Etsuko Price built up a collection of Japanese art centering on Edo-period works by Ito Jakuchu, Maruyama Ohkyo, and others. They established the Shin’enKan Foundation in 1980 to publicly show their collection and support research.

From 1984 to 1986, Etsuko studied art history under Professor Tadashi Kobayashi at Gakushuin University. The Price’s moved to Los Angeles in 1986, and played a central role in the establishment of the Pavilion for Japanese Art at the Los Angeles County Museum of Art in 1988, where they have place part of their collection. Their efforts have helped draw new attention to the field of Japanese art in Edo-period. The Prices have actively worked to promote U.S.-Japan cultural exchange and to support researchers. In 2006, an exhibition of over 109 works from the Price Collection was held at the Tokyo National Museum, National Museum of Modern Art of Kyoto, Kyushu National Museum, and Aichi Prefectural Museum of Art. In 2013, another major exhibition was held in Miyagi, Iwate, and Fukushima, as part of their efforts to support the Tohoku region devastated by the Great East Japan Earthquake and Tsunami.

The Broad is a contemporary art museum founded by philanthropists Eli and Edythe Broad on Grand Avenue in downtown Los Angeles. The museum offers free general admission and presents an active program of rotating temporary exhibitions and innovative audience engagement, all within a landmark building designed by Diller Scofidio + Renfro in collaboration with Gensler. The Broad is home to the Broad collection, which is one of the world’s leading collections of postwar and contemporary art.

The 120,000-square-foot building features two floors of gallery space and is the headquarters of The Broad Art Foundation’s worldwide lending library, which has been loaning collection works to museums around the world since 1984.