The New Age of Elder Care 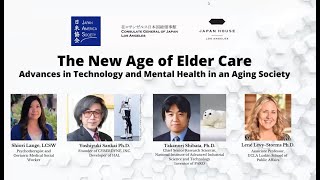 An increase in life expectancy and a decrease in birth rates are leading populations around the world towards an aging society. According to the Urban Institute, there are over 54 million Americans today that are age 65 and older. By 2040, this number will increase to 80 million.

In this webinar, we explore how to live a long and healthy life by focusing on the latest AI technology and psychosocial care methods that can physically and mentally empower the older adult population. On the technology side, we hear from two experts from Japan, a nation with the highest proportion of aging citizens of any country in the world: Dr. Yoshiyuki Sankai, the developer of the world’s first wearable cyborg HAL, and Dr. Takanori Shibata, the inventor of PARO, the therapeutic seal robot. On the mental health side, psychotherapist and Geriatric Medical Social Worker Mrs. Shiori Lange, LCSW will discuss how psychosocial approaches can help older adults and their loved ones. UCLA Associate Professor Lené Levy-Storms Ph.D. moderates the panel.

Yoshiyuki Sankai, Ph.D. | Founder, CYBERDYNE, INC., Developer of HAL
Yoshiyuki Sankai earned a Ph.D. in Engineering from the University of Tsukuba in Japan in 1987. He has progressed from being a research fellow at the Japan Society for the Promotion of Science (“JSPS”) to assistant professor, associate professor, and then professor at the Graduate School of Systems and Information Engineering, University of Tsukuba. Dr. Sankai is also a visiting professor at Baylor College of Medicine in Houston, Texas in the United States.

He is a fellow of the Robotics Society of Japan (“RSJ”) (2012) and the Society of Instrument and Control Engineers (“SICE”) (2014). He also served as Chairman (2005) and an Executive Board Member (2004-2005) of Advanced Robotics, as well as an Executive Board Member (2000-2012), Congress Head (2003), and President (2003) of the Japan Society of Embolus Detection and Treatment. He was a Program Manager of the Impulsing Paradigm Change through Disruptive Technologies (“ImPACT”) program, which was initiated by the Council for Science, Technology and Innovation (“CSTI”) of the Cabinet Office in Japan(2014-2018) and a member of Global Agenda Council on Robotics & Smart Devices of World Economic Forum (2011-2014). Now he is a Center Partner of the Center for the Fourth Industrial Revolution (2017-) , a member of Global Future Council of Production (2018-) , a member of Global Precision Medicine Council (2019-) of World Economic Forum and Business producer of Program for Building Regional Innovation Ecosystem by Ministry of Education, Culture, Sports, Science and Technology (“MEXT”).

He has established and championed a new academic field, “Cybernics: the fusion and combination of humans, robots and information systems,” bringing together differing realms of academia in brain/neuroscience, behavioral science, robotic engineering, IT, artificial intelligence, system integration, biology, psychology, philosophy, ethics, law, and business. “Cybernics” fuses “Humans” with “Cyber/Physical Space", and this concept runs at the core of the cutting edge innovations he has developed. Equipped with Cybernics, he is addressing the social issues of a super-aging society with the development of innovative technologies, establishment of new industries, and cultivation of next-generation entrepreneurs, and pioneering the future through the promotion of a virtuous cycle of innovation.

His achievements include the development of HAL, the world’s first “Wearable Cyborg” that promotes functional improvement/regeneration of the brain, nerve, and physical systems, from basic research on its motion principle through prototype testing, evaluation, and real-world implementation. In addition to Medical HAL, he continues to advance the development and application of various Cybernic systems (Vital Sensor, Precision Medicine, Human Big Data aggregation, AI analytics and statistical computing with super computers, other Cybernic robots) and is working toward the realization of a social and industrial visions known as “ZERO Burdening-Care Society” and “Society 5.0/5.1” In an effort to use his research results for the benefit of society, in June 2004, Dr. Sankai founded CYBERDYNE, INC.; a company designed to pioneer the future by developing, manufacturing, and commercializing innovative Cybernic systems and services in the fields of medicine, welfare, labor, production, and life. In March 2014, the company was listed in the “Mothers” section of the Tokyo Stock Exchange, as the first company to issue class shares in Japan. In addition, due to its distinctive advanced technology and growth probability, the company was awarded FY2013’s ”IPO of the Year” and FY2014’s “Innovative Equity Deal of the Year” by Thomson Reuters Market, becoming the first company ever to receive an award two years in a row. Now, Dr. Sankai is acting as a core member of the Ministry of Land, Infrastructure, Transport and Tourism’s Smart City Project/Tsukuba Promotion Council, as well as a founding core member of the Tsukuba Conference.

Takanori Shibata, Ph.D. | Chief Senior Research Scientist, National Institute of Advanced Industrial Science and Technology Inventor of PARO
Prof. Takanori Shibata was born in 1967 and received B.S., M.S. and Ph.D. in Electronic and Mechanical Engineering from Nagoya University in 89, 91 and 92, respectively. He was a research scientist at AIST from 93 to 98.

Concurrently, he was a visiting research scientist at the Artificial Intelligence Lab., Massachusetts Institute of Technology from 95 to 98, and a visiting research scientist at the Artificial Intelligence Lab., Univ. of Zurich in 96. At the AIST, Dr. Shibata was a senior research scientist from 98 to 13. Concurrently, he was the Deputy Director for Information and Communication Technology Policy, Bureau of Science, Technology, and Innovation Policy, Cabinet Office, Government of Japan in 2009 and 2010. Since 2013, he has been in the current position, and concurrently, a Professor at the School of Computing, Tokyo Institute of Technology and a Visiting Fellow at the AgeLab., Massachusetts Institute of Technology. His research interests include human-robot interaction, robot therapy, mental health for astronauts in long-term missions (e.g. to Mars), and humanitarian de-mining. He was certified as the inventor of a seal robot named PARO, the World’s Most Therapeutic Robot, by Guinness World Records in 2002. He has received many awards including the Japanese Prime Minister’s Award in 2003, The Outstanding Young Person (TOYP) of the world by Junior Chamber International (JCI) in 2004, and the Robot of the Year by Ministry of Economy, Trade and Industry in Japan in 2006. In 2015, PARO was awarded the “Patient Trophy” as innovation of non-pharmacological therapy for dementia by the AP-HP (Assistance Publique - Hôpitaux de Paris), France, that is one of the largest medical groups in the World. In 2017, PARO was awarded the “Best of the Best” by the Argentum (organization of senior living communities) in the US. In 2018, Dr. Shibata was awarded the “Ryman Prize” that is the most prestigious award in the fields of geriatric medicine, welfare and health. In 2019, he had an invited talk at a symposium on “AI for Older Persons” at the headquarters of United Nation in NY.

Shiori Lange, LCSW | Psychotherapist and Geriatric Medical Social Worker
Shiori Lange was born and raised in Saga, Japan. She came to the U.S in 1999. Shiori obtained her Bachelor's degree in Family Studies and Human Development from University of Arizona and obtained her Master's degree in Social Work from California State University, Long Beach.

Lené Levy-Storms, Ph.D. | Associate Professor, UCLA Luskin School of Public Affairs
Lené Levy-Storms is an Associate Professor in the Luskin School of Public Affairs, Department of Social Welfare and the Geffen School of Medicine, Department of Medicine, Division of Geriatrics at UCLA. Dr. Levy-Storms’ primary research has focused on communication as a mechanism for social support and caregiving for older adults, especially those living with Alzheimer’s disease (AD).

Since 2016, she has served as the academic representative on the California State Alzheimer’s Advisory Committee. Since 2004, she has partnered with Susan Kohler, a speech and language therapist and author of a book titled: “How to Communicate with Alzheimer’s”, to develop a behavioral training program for both family and non-family caregivers based on her book. They have produced a DVD series of peer-based, unscripted training modules on communication and an accompanying curriculum titled, “Get Connected”. With their innovation and UCLA’s Office of Intellectual Property’s agreement, Dr. Levy-Storms and Ms. Kohler started Connected Hearts, LLC in 2014 to promote their training programs outside of research. With funding from the National Institute on Aging, the Hartford Foundation, the American Medical Director’s Association, and the National Alzheimer’s Association, Dr. Levy-Storms developed methods of evaluating caregivers’ communication behaviors and has been using these methods to test “Get Connected” among a variety of caregivers and long-term care settings. She completed a pilot study, funded by the Archstone Foundation, in which both family and non-family caregivers participated in communication training simultaneously. In December, 2020, the UCLA Bedari Kindness Institute funded Dr. Levy-Storms to implement a translational version of Connected Hearts’ training modules. Dr. Levy-Storms also does research on policies related to caregiver training and was a Health and Aging Policy Fellow from 2010-2014 in a program funded by the The John A. Hartford Foundation, West Health, and The Atlantic Philanthropies (https://www.healthandagingpolicy.org/). Also, 2020, she received additional internal funding from UCLA to continue her policy work in association with the UCLA Health Policy Research Center.