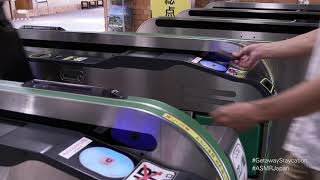 Japan’s railway system is world-renowned for its punctuality and has garnered a well-deserved reputation for being efficient, clean, and safe. It also boasts an extensive network of train lines operated by multiple companies working in conjunction that crisscrosses the nation and provides reliable transportation to even the most remote and unique locations in Japan. The country’s leading railway company, Japan Railways (JR) offers not only local trains that travel short distances but also operates the Shinkansen (bullet train), high-speed express trains that can traverse from one end of the country to the other at speeds up to 320 km/h.

Entering the Train Station
Train stations are essential hubs of transportation for the approximately 69,000,000 passengers who use the railway systems daily throughout Japan. As a result, the staggeringly high number of riders has led to major advancements in technology that makes the journey a convenient and efficient experience from start to finish. At most train stations, entering the gate is an automated process that allows riders to pass through with a simple tap of a pre-loaded transit card, speeding along entry and ensuring passengers arrive at the platform and catch their train in time to reach their destinations.

Boarding the Train
The next step in a passenger’s train journey is at the platform. Platforms are marked by painted signs and paths on the ground that indicate where passengers will board and alight. Trains also stop at these designated locations along the platform depending on the type of carriage. During particularly busy times, a queue will form on the left- and right-hand sides of where the train’s doors will be, with people waiting patiently for those alighting before boarding. 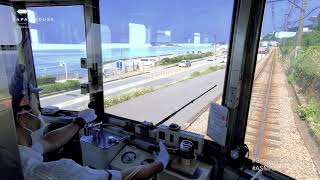 Leaving the Train Station
The average delay for trains in Japan is less than one minute every year *, making Japanese trains remarkably punctual. Even during rush hour, trains on the Yamanote Line, one of the busiest routes in Tokyo, will depart from the platform in as short as two-minute intervals, despite overcrowding that can exceed 250% past capacity. The punctuality, reliability, and most importantly, safety of Japanese trains is thanks to the orderliness and etiquette of riders as well as the efficient, systematic maintenance by train companies and employees.

Riding the Train
Tokyo’s trains are notoriously over-crowded, especially during peak hours. Although trains in the suburbs and the countryside tend to be less crowded or even sparsely used, Japanese passengers generally follow the same etiquette while riding the train—for example, many people use their mobile devices but never talk on their phones or speak at a loud volume as it could disturb other riders. While eating and drinking is strongly discouraged on short distance trains, it is a beloved past time on the Shinkansen. Passengers can purchase drinks and snacks on the train or even pick up an ekiben, a lunch box meal sold exclusively at train stations or on trains, featuring regional specialties that originate from a far-off final destination. 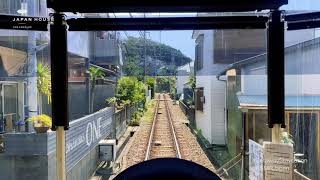 Continuing the Train Journey
Perhaps the best view from the train is at the very front in the driver’s seat—the forward trajectory brings an exhilarating rush at every twist and turn as the train tracks rush by underneath. Most passengers will never get to see the view from the driver’s seat, but the view from the carriage windows are just as scenic, particularly on the Enoden or Enoshima Electric Railway, a line that connects Kamakura Station and Fujisawa Station on the coast of the Shonan area south of Tokyo. The Enoden train offers panoramic views of the Shonan seaside, the breath-taking natural scenery dotted with surfers, beach lovers, and tourists all gathering to enjoy the fleeting warmth of the ocean waters.