Washoku | The Transformation of Japanese Cuisine in Changing Seasons

In 2013, washoku (Japanese cuisine) was registered in a UNESCO's Intangible Cultural Heritage list as a unique culinary culture that should be handed down from generation to generation.

Low in animal fat, a healthy and nutritionally balanced meal that is served in the basic combination of "one soup and three dishes (ichiju-sansai)" originated from the ingenious use of the umami flavor in cooking, which is taken from seafood and plants. Japanese cuisine embodies seasonal delicacies that visibly appear on dishes, vessels, and also in the way foods are arranged or decorated. Osechi ryori (ryori simply meaning "cooking"), referring to Japanese New Year's dishes, and mochi (rice cakes) are very closely associated with the year's end. For the Japanese, food is not merely a nutrition source, but something that has dialogues with nature, ingenuity handed down for generations, and is the very heart of their culture.

The essence of the enjoyment of washoku is rooted in people's reflection upon, reverence for, and relish of natural bounty. For instance, a traditional Japanese full-course meal or kaiseki is served with dishes decorated with seasonal flowers that have bloomed that day or food placed on fresh green leaves or pottery crafted with patterns unique to the source area of the ingredients. To some extent, they signify the transient nature of all living things and the respectful use of the ingredients. Kaiseki ryori originally started as a meal served before a formal tea ceremony whereby the host prepared for the guests. More popularized in today's Japan, modern kaiseki refers to a "get-together" and is more tailored to enjoy sake drinking, serving a full-course meal of elegant and refined Japanese dishes. For instance, dishes of a modern kaiseki ryori course are served one by one in the following order: sakizuke (appetizer), oshinogi (middle dish), wanmono (soup or boiled dish), mukouzuke (sashimi or raw fish), yakimono (grilled dish), takiawase (stew), rice and konomono (pickles), and lastly kanmi (sweets).

From soups and noodles to simmered dishes, traditional Japanese cuisine relies heavily on the umami (savory taste) of soup stock. Japanese cooking is often described as being light on salt is because its umami lends it sufficient flavor even with low salt content. The typical dashi is made from a combination of dried kelp (kombu) and bonito flakes, but depending on the region and cuisine, dried sardines, dried flying fish (ago), and dried shiitake mushrooms can also be used. 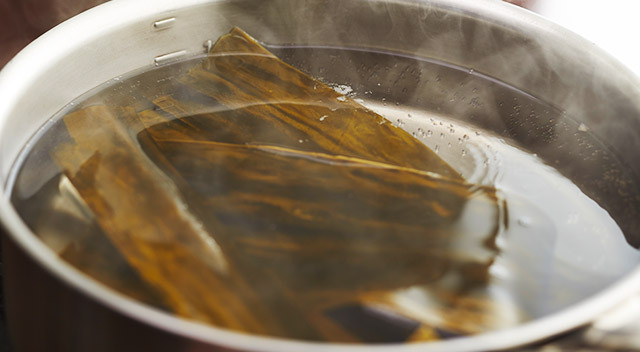 Teishoku is a set meal served on a single tray with a main dish, rice, miso soup, pickles, and side dishes. It is based on the typical ichiju-sansai style of home-cooked foods as a way of offering a well-balanced diet. While a popular teishoku menu includes sashimi (raw fish), karaage (deep-fried chicken), yakizakana (grilled fish), and yakiniku (grilled meat), the Japanese are continuously inventing an almost infinite variety of teishoku dishes offering a flexible combination of different foods to enjoy. Yakitori is bite-sized pieces of chicken on skewers that are grilled over an open fire, which is seasoned with salt or with sweet and savory tare (sauce). It is one of the most popular Japanese dishes that people enjoy regularly. In addition to the thigh and breast, yakitori consists of all parts of a chicken including the kawa (skin), bonjiri (tail), nankotsu (cartilage), hatsu (heart), reba (liver), sunagimo (gizzard), and chochin (ovary and young egg yolk). The origins of Japanese yakitori culture date back to the Heian period (794-1185). Bento culture has developed from the Japanese practice of people, when away from home, eating a pre-made 'meal to go' carried in a single-portion container filled with rice and accompanying dishes in a rich array of colors. Notably, Japan historically opted for cultivating short-grain rice as its staple food, which is sticky enough to be shaped in order to fit in a lunch box. This is said to be most likely why various types of bento have evolved. The only bento-making rule is as simple as putting ingredients into a container. Fill it with any favorites and nutritious items that are pleasing to the eye, such as a Japanese omelet, grilled salmon, and vegetables. 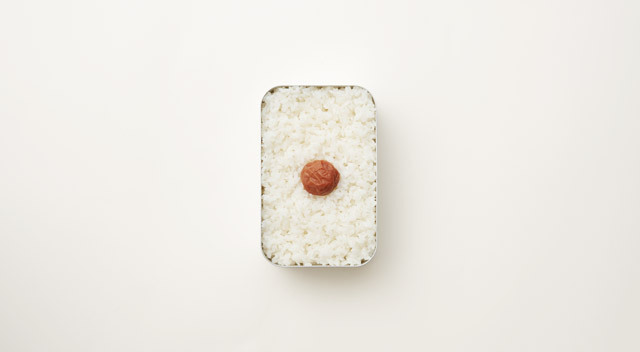