Two of the most popular salad dressings used in Japanese home cooking are “Wafū” – translated as ‘Japanese-style’ – and Grated Carrot Dressing. Wafū dressing delivers a refreshing, delicate balance of soy and citrus notes, which can be a foil for aromatic variations such as wasabi, ginger, and shiso. In grated carrot dressing, the vibrant color, body and texture of the vegetable make for a healthy and delicious complement to any salad. 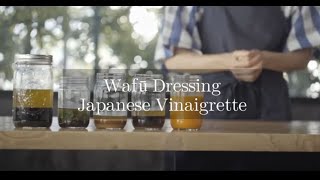 Combine the soy sauce, vinegar and mirin in a small pot and bring to a boil over medium-high heat. Remove from the heat and cool slightly.

Pour the vinegar mixture into a glass jar, and add the kombu, lemon juice and the squeezed half lemon (in order to transfer the lemon oil from the skin into the dressing). Rest the jar in the refrigerator overnight.

Remove the kombu and lemon half and discard. Add the olive oil and shake well before use.

Store refrigerated for up to two weeks. For the ginger and wasabi variations, simply add to the prepared wafū dressing and shake before serving.

For the shiso variation, soak the sliced shiso in cold water for 10 minutes to remove any bitterness. Pat the leaves dry then mix into the wafū dressing.

In a medium bowl, stir together all of the ingredients, except for the olive oil, with a rubber spatula.

Drizzle the olive oil slowly into the mixture, stirring to combine the dressing. Serve immediately.

Dress Up Your Dinner Part 2 | Sesame Based Dressings and Sauces