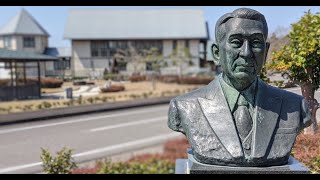 At the onset of WWII in 1940, Vice Consul Chiune Sugihara issued thousands of transit visas from Lithuania to Japan, granting escape to safety for thousands of Jewish people. His act of compassion saved thousands of lives and has been celebrated worldwide by authors, journalists, world leaders, and descendants of the Jewish refugees he rescued. Fleeing by ship and finally finding a welcoming refuge at the Port of Tsuruga, the story of these brave survivors is told in locations throughout Japan. A visit to the Chiune Sugihara Memorial Hall in Gifu is perhaps the perfect starting point to explore this story of courage and righteous humanity, as well as enjoy Japan’s restorative scenery, sights and experiences that nurture the human spirit.

This discussion shares popular tourist destinations and Jewish heritage locations in Japan, including those inspired by acts of humanity by Chiune Sugihara.

Marian Goldberg
Marian Goldberg was the Japan National Tourism Organization's Public Relations Manager for the Americas for 11 years (1997 to 2008). She has traveled to Japan 43 times, is one of America's foremost media and marketing authorities on travel to Japan, and also plans customized consumer Japan Travel. She has been quoted in The New York Times, as well as in USAToday and NBC News about the Tokyo Olympics this coming year, and Forbes online about Japan travel post Covid-19. She is a regular presenter on Japan at the New York Times Travel Show.

Bryan Takano | Coordinator for International Relations, Gifu Prefecture Government
Working as a member of Gifu Prefecture’s Inbound Tourism Promotions team for the past four years, Bryan has gained substantial knowledge about anything Gifu related and has been closely involved with the prefecture’s recent destination-branding projects. A majority of his time is spent promoting Gifu to English speakers all around the world both online, through the prefecture’s tourism website and social media, and in-person at various travel shows, seminars, and conventions.

"Visas for Life" 80th Anniversary: The Legacy of Chiune Sugihara
This program, joined by Leo Melamed, whose family received the Sugihara visas and were able to flee Nazi occupation, as well as Akinori Nishikawa, President of Port of Humanity Tsuruga Museum honors the legacy of Chiune Sugihara, the Japanese diplomat who saved the lives of thousands of displaced Jews during World War II.