"Visas for Life"
80th Anniversary:
The Legacy of Chiune Sugihara AJC Los Angeles and JAPAN HOUSE Los Angeles are proud to honor the legacy of Chiune Sugihara, the Japanese diplomat who saved the lives of thousands of displaced Jews during World War II. Recognized by Yad Vashem as one of the Righteous Among the Nations, Consul Sugihara issued transit visas at the Japanese Consulate in Kaunas, Lithuania to thousands of Jews, regardless of financial documentation. He enabled their safe passage through Japan to seek refuge in a third country.

These stories are documented at the newly-opened Port of Humanity Tsuruga Museum in Japan. We commemorate the 80th anniversary of the heroism of Chiune Sugihara by telling his story and discussing his enduring legacy upon the relationship between Japan and the Jewish community.

We are honored to have been joined by Leo Melamed, whose family received the Sugihara visas and were able to flee Nazi occupation, as well as Akinori Nishikawa, President of Port of Humanity Tsuruga Museum. The museum houses numerous stories and items of the locals that aided the Jewish refugees.

We are happy to honor the life and legacy of Chiune Sugihara with you, our partners at AJC Los Angeles, and the Consulate General of Japan in Los Angeles.

Leo Melamed | Chairman Emeritus of the Chicago Mercantile Exchange (CME Group), Visas for Life Survivor
Leo Melamed is the founder of financial futures. In 1972, as chairman of the Chicago Mercantile Exchange (CME Group), he revolutionized markets with the creation of the International Monetary Market (IMM)--the first futures exchange for financial instruments and the launch of currency futures. In the years that followed, Melamed led the CME in the introduction of a diverse number of financial instruments including Treasury Bills in 1976, Eurodollars in 1981, and Stock Index Futures in 1982.

Twenty years after their inception, Nobel Laureate in Economics, Merton Miller, named Financial Futures as “the most significant innovation of the past two decades.” In 1987, Melamed revolutionized futures trading again with the founding of Globex® the world’s first futures electronic trading system.

Melamed, a Holocaust survivor, found safety in the U.S. during World War II. The story of his escape as a child from Bialystok, Poland, as he and his parents miraculously outwitted the Nazis and the KGB, was an odyssey that took two years, spanned three continents, six languages, the Trans-Siberian railroad, and Japan---courtesy of a life-saving transit visa from Japanese Counsel General to Lithuania, Chiune Sugihara---happily ending in the United States in 1941.

Melamed is Chairman Emeritus of the CME Group and was a member of its Board, and chairman of its Strategic Steering Committee until his retirement in May of 2018. Melamed has been an adviser to the U.S. Commodity Futures Trading Commission (CFTC) and has served as special adviser on futures markets to governments worldwide. In 1982, Mr. Melamed led the futures industry in the creation of the National Futures Association (NFA), an industrywide self- regulatory organization. He serves as its Permanent Special Advisor. In 2010, he was appointed to the International Advisory Council (IAC) of the China Securities Regulatory Commission (CSRC). In 2018, Melamed was appointed Advisor to the Japanese regulator JFSA. Mr. Melamed serves on the Board of the Chicago Council on Global Affairs.

Mr. Melamed's prize winning memoirs, "Escape to the Futures," (Wiley, 1996), as well as his continuation memoirs, “For Crying Out Loud,” (Wiley, 2009), have been translated into Chinese, Japanese, Korean, Russian and Portuguese. He is also the author of “Leo Melamed on the Markets,” (Wiley, 1993), and “The Tenth Planet,” a science fiction novel (Bonus Books, 1984). He was editor of An Anthology, “The Merits of Flexible Exchange Rates,” (George Mason University Press, 1988). Many of his essays and lectures can be found on his website, www.LeoMelamed.com.

Melamed is the recipient of numerous awards, including: The 2005 CME Melamed-Arditti Innovation Award, and the 2016 State of Illinois Order of Lincoln Award, the highest award conferred by the State of Illinois. At the close of the last century, Leo Melamed was named by the former editor of the Chicago Tribune “among the ten most important Chicagoans in business of the 20th Century.” In 2017, Mr. Melamed received The Order of the Rising Sun, Gold and Silver Star, the highest award bestowed on an individual by the Emperor of Japan for achievements in initiating financial futures markets worldwide, his outstanding contribution to Japan-U.S. relationship, and for promoting recognition of Consul-General, Chiune Sugihara’s life-saving deeds during World War II.

Leo Melamed, an attorney by profession holds a Doctor of Laws Degree from John Marshall Law School. He is Chairman and CEO of Melamed & Associates, Inc., a global consulting enterprise founded in 1993.

From criminal justice (his California Money Bail Reform Act eliminated the unfair and unjust cash bail system in California), to technology related issues, (in 2018 he negotiated the passage of the California Consumer Privacy Act, enacting the strongest data privacy protections in the nation), Hertzberg approaches every problem through a lens of governing for the next generation, not the next election. Most recently, he’s been working with both sides of the aisle to help rebuild the future of the California economy in a post-COVID19 world.

Rick is a builder and innovator who has worked to advance human rights and democratic values, enhance intergroup understanding, and promote the security and well-being of Jews and other vulnerable communities in the United States, Israel, and around the world. His work with NGOs has included efforts to advance humanitarian medical aid and peaceful coexistence in Israel and neighboring countries. He has led fact-finding missions to Israel, Ukraine, Ethiopia, and Cuba. He also spearheaded international efforts to mark the 20th Commemoration of the 1994 Genocide Against the Tutsi in Rwanda.

Previously, Rick led the creation and establishment of the Illinois Holocaust Museum and Education Center, as its founding executive director. The museum opened in 2009 to international acclaim and the participation of President Bill Clinton, Nobel Laureate and Holocaust survivor Elie Wiesel, and an audience of 13,000. Under his leadership, the museum hosted over half a million visitors, including heads of state and other dignitaries. In 2013, Rick received an Emmy Award as Co-Executive Producer of the nationally-broadcast documentary, Skokie: Invaded but Not Conquered. Rick also enjoyed a 21-year tenure with the Anti-Defamation League, including a decade as Midwest regional director. He built bridges between the African-American and Jewish communities and worked closely with law enforcement on issues of antisemitism and extremism. His achievements were recognized with the FBI’s Community Leadership Award and the City of Chicago’s Human Relations Award.

Rick and his wife Susan, a native of Los Angeles, are the proud parents of two adult children. He holds a bachelor’s degree in international relations and Judaic studies from Tulane University, and has studied at Hebrew University’s Rothberg School for Overseas Students. He grew up in upstate New York and Knoxville, Tennessee.

Yuko Kaifu | President, JAPAN HOUSE Los Angeles
Yuko Kaifu is the President of Japan House in Los Angeles. She started her career at the Ministry of Foreign Affairs of Japan.  Her assignments include the Embassy of Japan in Canada and the Ministry’s headquarters in Tokyo. During her service in Tokyo, she was also appointed an official interpreter for dignitaries including Her Majesty the Empress, Foreign Minister, and Prime Minister of Japan.  In 2001, she was appointed a Consul at the Consulate General of Japan in Los Angeles.

In 2007, she left the government to work at the Japanese American National Museum as the Vice President, and then at MUFG Union Bank as a Managing Director of Corporate Communications from 2009 to 2016.  She joined Japan House Los Angeles in January 2016 to launch the project.  She serves on the boards of US-Japan Council, Hollywood Chamber of Commerce, and UCLA Terasaki Center for Japanese Studies.  She graduated from Nara Women’s University and received M.A. in Sociology from Queen’s University in Canada.

Journey through Japan | Chiune Sugihara Story of Compassion
This discussion shares popular tourist destinations and Jewish heritage locations in Japan, including those inspired by acts of humanity by Chiune Sugihara.

Click here to read 'Visas for Life' and the Bond for Humanity. 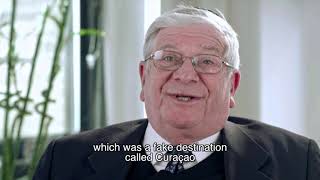